My waters broke in a gush at 9.05pm. I phoned the hospital and the midwife said to have a shower and come on in. I lost my plug and had a show around 10pm. We got to the hospital around 10.45pm, and after checking in our midwife sent us to bed as contractions had not started and she said I was not in established labor and that, being a first time mom it would probably start in the morning. The hospital brought Liam (my hubby) a recliner chair for my room and we went to bed. My contractions started shortly after 1am, they were intense and started at 2 minutes apart. I asked to be taken to the bath but my midwife (Helen) said this would only slow things down and it would be better to wait. A few intense surges later I buzzed Helen again and told her I needed the bath. We went to the labor suite and after examining me said the babies head was low on my cervix but my cervix was closed. She said a warm bath would probably be good to slow it down as my contractions were so intense, about 45 seconds long and very close together. Shortly after that I asked for pain relief. I became frightened as I thought if this was only the beginning and the surges were going to get stronger, longer and closer together I didn't think I could cope. Helen told me I shouldn't have anything just yet as this would only slow labor down and we would only then have to induce it to get things moving again. I remember thinking, I just have to cope for a while longer and then she will give me something. My body had gone into shock and I was shivering and had pins and needles all over my body....I lay like this in the water just breathing and hearing the words from the Calm Birth tapes for what seemed like 5 minutes, before telling Liam to tell Helen that I was beginning to push. Helen came rushing in and told me not to push as I wasn't dilated, right as she said that I had another surge and she could tell I wasn't in control of my body anymore! She phoned my obstetrician who told her to check me again, she did and gasped, 'You're 10 centimeters!' She told me to push with the urges I was having. My obstetrician walked in just in time to put his gloves on as the head was coming out. I pushed for around 10 minutes and our little baby came out with a swoosh. It was a boy! He was placed on my breast immediately at 4.20am and Liam cut the cord after it stopped pulsing. Shortly after, I got out of the bath and had more skin to skin time in bed and he began to breastfeed. Looking back on the experience I am so happy that I wasn't given drugs when I asked for them as a drug free birth was what I really wanted and our son is so calm and so relaxed. I think if I had been told from the beginning that what I was feeling wasn't going to intensify any further I would have been fine because the sensations although uncomfortable, were not unbearable. I became scared at how hard and fast it came and being a first time mom, I didn't know where it was going to go. As for the pushing stage, I loved that part! It was exhilarating pushing him out, and that part didn't hurt at all. It was a completely different sensation to the stage one surges. It felt so good to push. Even as he came out the stretching and tingling I felt was not painful it was really encouraging and I pushed and breathed with everything I had to birth him, which felt wonderful. It was a primal, life giving feeling that can't be described. I will never forget the moment he was placed in my arms. Such a breathtaking, magical moment. Studying Calm Birth/Hypno Birth before hand made all the difference for us. 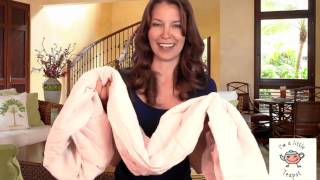